I’ve never considered myself a good writer. I’ve always looked at what others can do and thought “Wow I wish I could express myself as well as they can”. But this is my journal about the most amazing trip of my life. These are my thoughts and feelings. I write them down for myself so that I can remember them, I hope you enjoy my ramblings 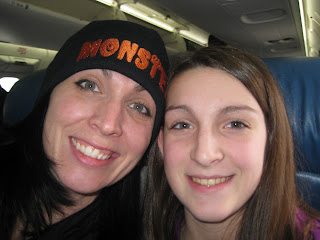 So I think it is January 14th, I know that I am in Ghana Africa… How crazy is that! I am so tired and I’ve seen so much that I really don’t know where to begin.

The flight over was fine, unfortunately like the whiny person that I can be I was upset because my TV didn’t work. I kept reminding myself that I am way too spoiled!

Benadryl is the BEST! I was able to sleep most of the flight. My dreams were filled with thoughts of being on a plane signing… then someone gave me a sandwich. That actually happened but Pablo and Carissa, who were sitting right behind me said it was just a dream. I found the sandwich on the floor later.

When they served breakfast Carissa opened her window and said “Look it’s Africa”. It was really cool to look down and see Africa. I was a little bummed that we had missed seeing the ocean. When we were closer to landing though we were right along the coast and got to see the ocean then, very cool!

The first thing that I noticed when I stepped out of the plane was the hot breeze. Then I was overwhelmed with the smell of spicy dirt. I’m not sure there is a better way to describe it. It was hot and strange, and the plane was parked really far away from the airport. I looked around and couldn’t see the rest of our group so Pablo, Carissa, Ellie and I made sure we stayed together. A bus came to us and we crammed it full of people and luggage and headed to the terminal. Ellie just kept staring around; I’m really not sure what she was thinking.

In the terminal Curry kept stressing “Hold on to your stuff, if someone helps you they expect to get paid, so don’t let anyone take your things.” We made it through the “Gauntlet” and waited outside for about 20 minutes for the tro-tro to arrive. As we headed to the tro-tro some man grabbed my bag. I thought he was one of our drivers, he wasn’t. He was trying to help the 3 drivers we already had. I grabbed my bag back and a security guard escorted him away from us. He came back a few minutes later asking for payment.

The tro-tro was interesting; we had 12 people and all of our luggage, 1-2 bags each. Once we all crammed in, they roped the back shut and we started on the craziest, scariest, ride of my life. The sights and sounds and smells that followed are almost indescribable. Houses next to shacks or lean-to’s. Shipping containers that are shops, or homes. People in the street, lining the street, walking in between the rows of traffic selling things…off of their heads. People on crutches, due to polio, begging. People unashamedly peeing on the side of the road. The smell of burning garbage, of filth and human waste, of spicy food cooking all of this mixed with the hot air, loud music and the stop and go, swerve around the car in front of you, hit the brakes and drive backwards ON THE HIGHWAY, was incredible and overwhelming.

We bought water in bags off of someone’s head. They hand me a bag and Curry says that you bite off the end and drink the water out of the bag. Well me being the germaphob that I am I start looking for some wipes before I put it in my mouth. I was chastised and teased until I gave up and tore the end off with my teeth, spilling all over myself and drank the water. My thoughts were filled with all of the germs I was sure I was ingesting.

Things calmed down a bit as we left the city and climbed the windy mountain road. Up on the mountain overlooking the city were massive houses, owned by government officials. The inequality of it seems really odd to me, but I really don’t want to go into that.

As I looked at the dirt and brightly colored buildings, the garbage mixed with the plants and trees, I am struck with the beauty of the place and it’s people. As we pass villages there are people selling things by the side of the road and just beyond them are children playing with rocks and sticks. They smile and yell “Obruni” and continue to happily play. Completely unaware of all of the things that I think they lack.

We finally arrive at our hotel, which is so different from what I was expecting. I really had prepared myself for the worst. The rooms are HUGE and each room has its own bathroom with flushing toilets and showers. We divvy up the rooms and Ellie and Leah want to share so I suggest bunking up with Rachel’s cousin Jen as it’s really the only logical solution. Jen is AMAZING! We have made an instant connection which makes sharing a room even easier. After we drop our stuff in the rooms Curry suggests that we take a walk into town.

We start walking  and people everywhere  stop to stare at the 9 obruni’s, kids yell, taxi’s honk… a lot, and we stare right back. As we’re walking we see some Deaf students from the High School and we sign Hi. A teenage boy sees Ellie and tells me how beautiful she is. He was shocked when I told him that she’s my daughter. I’m really not sure what to think of that. As we walk on we saw a ton of shipping container shops all closed up for the night.

A chicken was in the gutter, an old woman scowled at me for taking a picture of it. Taxi’s are flying past us and we’re trying not to get hit as the sky is growing ever darker. We were about a mile from the hotel when Curry suggests that we turn back. It’s almost time for dinner. On the way back Curry buys us oranges. These have the peel cut off leaving the white pith with a slice cut off the top. Then you squeeze the orange and suck the juice out of the top. Messy, sticky but oh so delicious!

The walk back was treacherous as it is now completely dark and we don’t have any flashlights. Luckily I could see Pablo’s light shirt and Curry’s white legs.

We made it back to the hotel and Joyce our beautiful hotel manager had dinner waiting for us. We had delicious Chicken, spicy rice and fresh pineapple. I was surprised that Ellie ate the rice, she’s not normally one that likes spicy anything. After a few minutes she leaned over and said, “I can’t taste my Sprite anymore.”

After dinner we all went to our rooms, Jen and I talked and talked or I should say that I went on long enough that I put Jen to sleep. Ok maybe it was the Benadryl that she took before we laid down. A short time after I fell asleep Ellie came in and snuggled. She was a bit homesick and really missing Michael and the boys. I gave her a Benadryl and took another one myself, I knew without it I would never be able to fall asleep. The noises outside were far too interesting. I’m not sure what was out there but they were alive and wanted me to know they were there.

Ronai - too powerful to be spoken